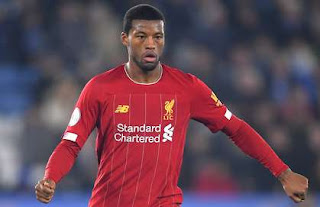 Gini Wijnaldum’s future at Liverpool is surprisingly far from certain.

The Dutch midfielder currently has just 18 months remaining on his contract after being snapped up by the Reds in the summer of 2016 for £25m.

Wijnaldum has gone on to become one of Jurgen Klopp’s key men in midfield, memorably scoring two goals in the 4-0 win over Barcelona in the Champions League last season.

Latest: The game against Eveton was the most “Intense” of my life – Takumi Minamino makes admission about Liverpool system

But according to The Athletic, the Dutchman could leave Anfield come the end of the season.

David Ornstein reports that Wijnaldum has serious interest from clubs across Italy and Spain.

Read Also: Being a part of this Liverpool side means I am the luckiest man alive -Klopp

However, he does also state that Liverpool would ideally prefer to keep him beyond the end of the campaign and would risk letting him leave for free in the summer of 2021.

But is that a risk Liverpool can take, despite their financial stability and success on the pitch?

After all, while Wijnaldum has been immense in the famous red shirt, he is far from irreplaceable.

In Fabinho, Jordan Henderson and Naby Keita, Klopp already has a first-choice midfield three ready and at his disposal to cope with Wijnaldum’s departure.

Takumi Minamino could also play a vital role in helping ease his exit, with the Japanese international more than capable of playing in a deeper role to the one he fulfilled against Everton yesterday evening.

So what could possibly be the reason behind Wijnaldum’s unexpected desires to ditch Anfield?

More: 9 Things That Has Happened Since Liverpool Last Lost A Game At Home

Well, perhaps in the latter stages of his career, the Dutchman is eager for new challenges in a different environment.

Come May, he is likely to add a Premier League winners’ medal to that of his Champions League one and Wijnaldum may feel that leaving on a high is the way to go.

Or, this could just be a masterplan from his agent to earn him a bumper new contract at Liverpool.