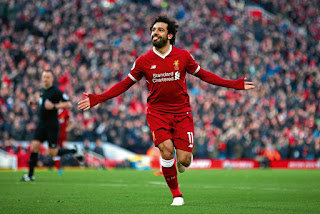 When Liverpool curved out more than £34 million to sign Mohamed Salah, it’s fair to say a few fans weren’t convinced.

The Egyptian had previously endured a failed spell at Chelsea but 29 Serie A goals in 65 appearances for Roma saw Liverpool spend a then club-record fee on the winger.

And after scoring on his debut against Watford in the Premier League, Salah has since been on fire.

Read Also: We have a chance, but we must keep up our momentum – Roberto Firmino

In fact, he still hasn’t looked back.

During his debut campaign in Anfield, Salah was incredible. Everything he touched turned to goals as he hit 44 in 52 appearances.

Well, not quite but Salah did enough to prove he was far from a one-season wonder.

Twenty-two goals in 38 league games saw him share the Golden Boot once again, while he also scored in the Champions League final to help Liverpool see off Tottenham in Madrid and exorcise the demons of Kiev.

Two-and-a-half years on, there could be quite a few Liverpool fans – and rival fans – regretting their reaction when Liverpool announced the signing of Salah.

Unfortunately for some supporters, they’ve forgotten to go back and delete their tweets.

When Sky Sports tweeted the breaking news that Liverpool had “completed the signing of Roma’s Mohamed Salah on five-year deal for a fee that could rise to £34.3m” back in 2017, a few rivals fans decided to reply with their opinion of the former Chelsea man.

They look a bit silly now, don’t they?

Salah will now go down as one of the best signings in Liverpool’s history having already helped them  lift an European Cup. If he can help them win their first ever Premier League title, then Salah will become a club legend.