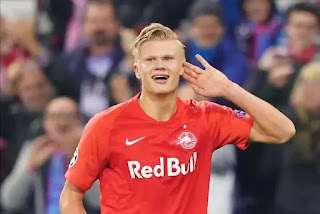 Erling Haaland has said Borussia Dortmund’s wonderful plan “triggered” him and that is why he snubbed a move to Manchester United.

The teenager recently signed a four-and-a-half-year deal with the Bundesliga side this month.

However, before the move, he attracted interest from United, RB Leipzig and Juventus.

On why he chose Dortmund, Haaland said according to Goal: “They just went direct and said, ‘We need you upfront, we like your playing style and we want to have you here’.

“I liked how they spoke to me then and that’s what triggered me [to sign]. I just felt that me and Dortmund was a good match.”

Haaland joins a Dortmund side fourth in the Bundesliga and seven points behind leaders Leipzig after 17 games.