FootballTransfer: “I am here to improve things’ All Ibrahimovic said after sealing AC Milan return 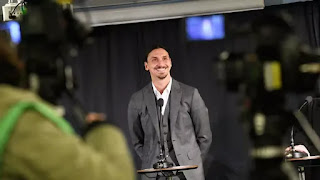 Zlatan Ibrahimovic has vowed to improve AC Milan, as he was officially unveiled on Friday, following his decision to return to the San Siro.

Ibrahimovic joins as a free agent, having decided to end his two-year stint in MLS with LA Galaxy.

Milan currently sit 11th in the table after 17 matches.

“I am here to improve things, I have watched the squad from the outside,” Ibrahimovic said.

“Let’s take it one match at a time – there is a lot of quality in the squad.

“The results are not ‘wow,’ but it’s a marathon not a sprint.”