FA Cup: We were lazy! Ancelotti blasts Everton players after 1-0 defeat to Liverpool 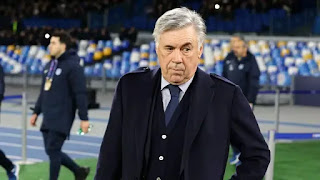 Everton manager, Carlo Ancelotti, has criticised his players for not able to keep a high intensity in the second half against Liverpool following their 1-0 defeat against the Reds in the FA Cup third-round encounter on Sunday.

According to Ancelotti, his players lost ‘energy and confidence’ against a youthful Liverpool side, describing Toffees’ performance against the host as ‘not good enough’.

A second half goal from Curtis Jones gave Jurgen Klopp’s side victory over the Toffees at Anfield.

“I am not used to speaking to the players after the game, but I am going to speak to them about this,” said Ancelotti as quoted by Sky Sports after the game.

“I think in the second half we were not able to keep the right ideas on the pitch as we did in the first half, when we had (the) opportunity to score.

“The fact we didn’t score in the first half affected the performance in the second half, which was not good enough.”

Ancelotti added: “The line-up of Liverpool didn’t affect our idea. “It was to play a good game. We knew Liverpool would put fresh players in and the intensity could be high.

“The defeat arrived because we were not able to keep a high intensity in the second (half). We lost energy and confidence.”

“We are going to speak all together and find a solution to try to improve the team.”