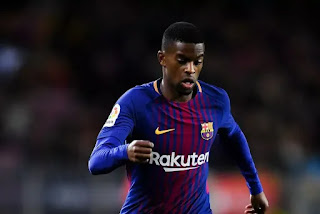 According to Spanish newspaper, Sport, Barcelona are ready to sell Semedo for €50million and Man United are a likely destination for the 26-year-old despite the fact the Red Devils have signed Aaron Wan-Bissaka last summer.

The report claimed that Barca’s Sporting Director, Eric Abidal has met Semedo’s agent, Jorge Mendes, in Dubai to discuss the Portugal international’s future at the club.

Gutsynaij had reported that Semedo was among the ten players Barcelona wanted to sell last summer.

The right-back has not really lived up to expectations at the Camp Nou since joining the club from Benfica in 2017.