EPL: Pepe reveals what Arteta told him before 2-0 win over Man Utd 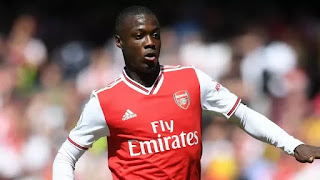 Arsenal winger, Nicolas Pepe, has revealed his chat with head coach, Mikel Arteta, before their 2-0 win over Manchester United on Wednesday.

Arteta did not pick Pepe in his starting XI since he replaced Unai Emery, but the Ivorian got his chance against United.

The former Lille man responded with the opening goal and was also involved in the second scored by Sokratis.

Pepe left the pitch to ovations from the fans and spoke about how Arteta has helped him settle in.

“We are doing a lot, a lot of video during training in order to perform well during the match.

“I had a discussion with the coach this morning and he told me I was going to start. He asked if I felt ready and stuff like that.

“I told him I felt ready. Today is also my mother’s birthday,” Pepe told RMC.