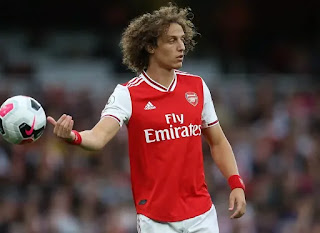 Luiz put in a fine display, as goals from Nicolas Pepe and Sokratis Papastathopoulos secured Mikel Arteta’s first win in charge of the Gunners.

After the game, he told BT Sport: “We have to be honest and admit physically we are not ready, but you have to show heart and this team is ready to change a lot of things.

“We showed that today and we are going to do big things in the future but step by step.

“Mikel Arteta is a great coach, he knows football, he was a great player.

“He brings things and I believe in his philosophy. I think he can improve every single player.

“In life when you are happy the results can be totally different.

“I always like to use the mantra, if you sleep happy you can sleep for hours, it’s better than sleeping sad for eight hours.

“If you work with happiness and believing what you are doing it is totally different, so I’m happy with everybody.

“But you need to understand our season is not there, we started very bad, I have to be honest, but things can change and there are still some titles to fight [for] and improvement for the team for the future.”

Reacting to Luiz’s comments, Wright told Premier League Productions: “It seems to me like he’s saying something about the old manager and maybe the way that he set them up, the way they trained – maybe they didn’t enjoy it as much.

“He’s saying he was sad, when you’re happy you can sleep for hours and stuff like that, I don’t know. It went a bit deep for me!

“But what it says to me is that they’re obviously a lot happier than they were.