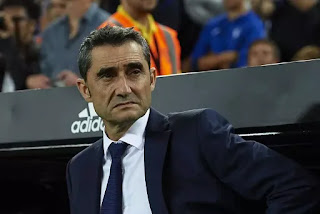 According to Valverde, the Dutch star’s red card did Barcelona damage against the host during the encounter.

De Jong was sent off for a second bookable offence in 75 minutes of the encounter as goals from Luis Suarez, Arturo Vidal, David Lopez and Wu Lei ensure both teams shared a point each at the Cornella-El Prat Stadium.

“We had three chances to kill the game off and we ended up drawing from one chance.

“We more or less controlled the match and we were fine after coming back (from a goal down), with this intention of continuing to score.

“They went forward and we were left with more space. It was in our favour and it removed us a bit, the opponent is always going to push at the end.

“They’re going to have a (chance), they had that and they converted it.

“It leaves a bad taste because we wanted the three points.”

The result against Espanyol means Valverde’s men are now level on points at the top of LaLiga table with Real Madrid.