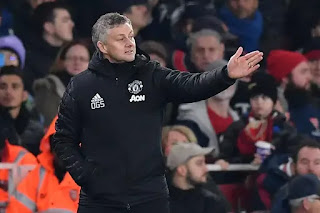 Solskjaer claimed that his side’s first-half performance against Man City was the ‘worst’ they have played this season.

Pep Guardiola’s side defeated the Red Devils 3-1 at Old Trafford, thanks to three goals from Bernardo Silva, Riyad Mahrez and Andreas Pereira (OG).

Marcus Rashford did score a goal for Solskjaer’s men.

Speaking after the game, Solskjaer was quoted by Sky Sports as saying at his post-match press conference: “From their goal until half-time, that is the worst that we have played. From the first goal to half-time we just could not cope with that setback. We were running in between. The pressure didn’t work and we let them play. Our heads dropped. We just made decisions that we should not do.

“We know they can play that way, we’ve seen them do that a few times. I went to see them last year against Chelsea, they played that way and won 5-0 at the Etihad so that’s not a surprise, but they’re good at what they’re doing.

“That needed sorting at half-time… Someone needed to take the responsibility and we did that in the second half.

“Even though it is a steep mountain to climb, we can still climb it. We just need to look forward. We’ve shown before that we’ve been down from a home tie and turned it around, last year against PSG for example, so we’ve just got to believe when we go to the Etihad and know that we can put a performance on.”

Man United will now play Man City on January 29 in the return leg at the Etihad Stadium.