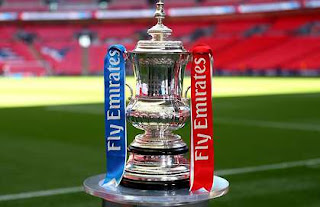 Every FA Cup third round fixture will kick-off one minute later than usual to promote mental health.

This weekend, which sees Premier League and Championship teams enter the competition, is always iconic in the English football calendar and this year, it will be extra significant.

The Football Association’s ‘Heads Up’ campaign, which aims to raise awareness around mental health, is the reason behind the delay.

“It is hoped that the initiative will raise awareness of the importance of looking after our mental health, with 60 seconds representing just the first step in the journey to improved wellbeing,” A statement from the FA reads.

“During the minute delay, fans will be encouraged to consider the positive impact 60 seconds can have on their own wellbeing or in supporting a friend or family member.”

During the one-minute kickoff delay, the initiative will see awareness videos played both inside the stadium and broadcast on live TV.

“While delaying kick-off times by 60 seconds is a simple idea, it provides a powerful platform for us and our Heads Up charity partners to deliver a really important message on mental health,” FA chief executive Mark Bullingham said.

READ ALSO   FA Cup fourth round draw: All Teams To Drawn Against Each Other

“We know that men, in particular, can be reluctant to talk about the subject, so it is important that we use football as a vehicle to stress the importance of mental fitness.”

Godric Smith, chair of the Heads Up campaign, added: “It’s fitting that the first big Heads Up campaign moment should be linked to the Emirates FA Cup third round – a signature moment in any football season.

“The Emirates FA Cup is a competition for everyone – for clubs big and small – and we want to use its power to help show that we all have mental health and that we can all take a minute to focus on how we can start to improve it.”