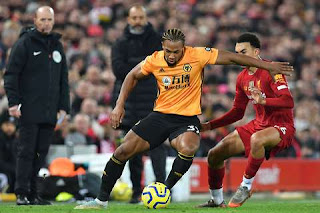 Certainly there is no stopping Wolves’ Adams Traore!

Even rival fans can’t help but have a soft spot for the electric forward, who appears to have finally broken free of his ‘diamond in the rough’ tag.

The 23-year-old is now delivering end product at the highest level, scoring against Manchester City once again on Friday evening – his third against Pep Guardiola’s side in 2019/20.

All in all, Traore has four goals and four assists in his 19 Premier League games this season, a vast improvement on 2018/19, where he managed just one apiece in 29 appearances.

But aside from adding goals and assists to his game, Traore has also taken his forte of ‘ending careers’ to a new level this season.

Defenders up and down the Premier League have been left trailing in his wake, with his bodybuilder physique, combined with his Usain Bolt-like speed, simply too much to handle.

To commemorate Traore’s brilliance, Score 90 have complied a YouTube video showcasing all of his mind-boggling bursts of acceleration and feats of dribbling – ones that almost look impossible to the naked eye – in 2019.