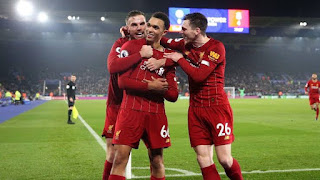 Liverpool’s academy star Trent Alexander-Arnold put in a sensational performance for Liverpool in their 4-0 win over Leicester city last night.

Liverpool extended their lead at the top of the table to 13 points after they produced a stunning display at the King Power stadium, cantering to a devastating 4-0 win.

Rampaging right-back Alexander-Arnold was the star of the show, registering two assists and capping a fine individual performance with only his second goal of the season. 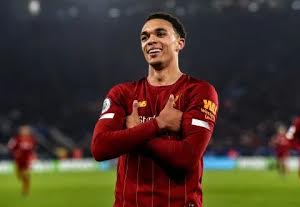 Leicester, currently second in the table, caused Liverpool problems earlier in the season at Anfield when they attempted to isolate Van Dijk and Dejan Lovren against Jamie Vardy and asked Maddison to tuck in and deny Jurgen Klopp’s side space in central areas.

‘Maddison was playing inside so we had to find [Trent], we had to switch the ball quick, get him in open spaces, and we did that well,’ said Van Dijk. ‘And obviously he did well too!

‘They had a gameplan. And I think they did the same at Anfield and it worked pretty well for them. They might have thought they’ll do the same, try to isolate me with Barnes and Joe with Vardy.

‘But it didn’t work out too well for them. Obviously we had to exploit the spaces that they give us, and I think we did that very well.’

Liverpool are now heavily odds on to win their  first league title since 1990, while Arsenal legend Thierry Henry believes Klopp’s men are well capable of ending the season unbeaten, but Van Dijk insists nobody is taking anything for granted at this stage of the campaign.

He added: ‘Yeah, you guys have to talk about it! You guys can do the talking, we’ll focus on the games ahead of us.

‘We can’t say too much, we will give the same answers every time and try to win the game ahead of us. We’re feeling good and hopefully we can continue.