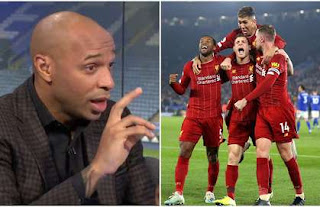 Ex Arsenal Legend Thierry Henry believes Liverpool can go unbeaten in the Premier League this season, to become only the second ‘Invincible’ team in English history.

The first side to do that, of course, was Arsenal. Henry was one of the stars of their squad, so he knows exactly what it takes to achieve the famous feat.

Speaking ahead of Liverpool’s match with Leicester, the Frenchman said:

“It’s for me a statement tonight. If they come here and win it, and win it well, it will be a matter of when, not if, they are going to win it [the Premier League].

“I think that team can stay unbeaten, and it will be who’s going to beat them first, because I think they will win the league. It’s not a big statement because they’re above everybody this year.”