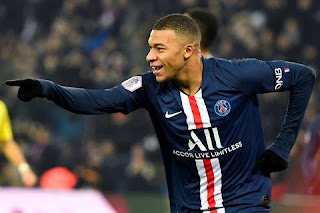 The PSG striker, who turned 21 earlier this month, continues to build a reputation as the heir to Lionel Messi’s throne.

While he came sixth in the Ballon d’Or rankings, all five of those who came ahead of him – Messi, Virgil van Dijk, Cristiano Ronado, Sadio Mane, and Mo Salah – are all significantly older.

In terms of goalscoring achievements too, it appears Mbappe is the man the Barcelona forward is most worried about.

To be frank, the days when the Argentine would go toe-to-toe with Ronaldo are now behind us.

It’s a new era, one in which the French World Cup winner is at the forefront of European football.

His exploits were nearly rewarded with a European Golden Shoe in 2018/19 too, only for him to be beaten to the accolade by Messi.

The 32-year-old won his sixth award after scoring 36 goals in La Liga.

There is no shame in that whatsoever and the starlet admits he was honoured to have learned his rival was closely monitoring his goals.

“Instead of just putting my head under the covers and waiting calmly for the end of the season, I was trying to outdo myself.

“I saw that I could maybe win the top goalscorer in Europe award. But, facing off against me, was Messi.

“‘This is crazy! Is he doing this on purpose?’ He responded to me: ‘Of course he is looking at you!’

“I said to myself: ‘Ah, not bad, Messi is watching me…’ It is flattering to see that such a player is not overlooking you.”

Interestingly, neither is leading the race in the 2019/20 campaign.

Messi is 16th with 13 goals, whereas Mbappe has netted 11 times for PSG in the league this term.

Regardless of the current standings, rest assured that the six-time Ballon d’Or winner knows exactly what he has to do to make a late surge in the second half of the season.