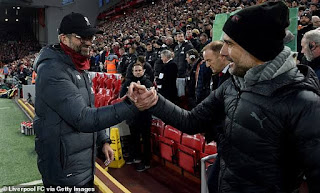 Liverpool manager Jurgen Klopp has described Manchester City needing to play two Premier League games in the space of 48 hours as “a crime”.

Pep Guardiola’s side are set to face Wolves on December 27 before backing up on the 29th to host Sheffield United.

The City boss has already expressed his anger with the scheduling and even wrote a letter to the Premier League to complain.

While the Reds may be hoping Guardiola’s men stumble further in the Premier League title race over the festive season, Klopp sympathised with City’s cause and believes no team should have to play two league games in such quick succession.

“It is absolutely not ok,” Klopp said. “None of the managers have a problem playing on Boxing Day, but playing on the 27th and 29th is a crime.

“This year we play 26th and 29th and it is like a holiday. I understand all those saying it should not happen. They are not moaning. They are telling.

“It is not for the spectacle. It would not be a problem to play 26th and 29th with more teams. There is no reason why more teams do not get more than 48 hours between a Premier League game.

“Obviously, we can say what we want but no one is listening. Every year is the same for the coaches with the 26th and 28th. Sports science gives you nothing to deal with this. The body needs a specific amount of time to go again. But we ignore that completely.

“We just say, ‘Oh, they look strange running around again today.’ We are not in that situation this year, but I understand each manager who mentions it from time to time – or pretty much always – when we see it coming up because it is just not ok, but other people have to decide that.”

Liverpool were recently forced to play Carabao Cup and Club World Cup games in the space of 24 hours with Klopp opting to field two different sides for each competition.

After claiming the Club World Cup, the Reds’ focus now returns to the Premier League with the club currently 10 points clear at the top of the table.

Ahead of a Boxing Day clash against Leicester City, Klopp stressed his side can’t afford to slip up with Manchester City setting a new standard for domestic consistency.

“It has changed. You are not allowed to lose games any more,” he said.

“The kind of consistency they [Manchester City] showed in the last three years is incredible and very difficult to do. So they became champions two years ago and last year, we helped a lot and they helped us a lot as we tried to catch up with them. They did it in an incredible way.

“Winning the Premier League should be difficult, it is such a strong league with all the teams you see now.

READ ALSO   LaLiga: Messi explains what Guardiola did to him

“With all the problems and difficulties we face, that is pretty much a plan and sometimes it works out. That is what we do.”