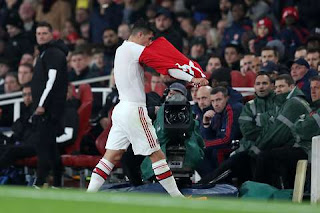 Arsenal Midfielder Granit Xhaka has agreed terms with Hertha Berlin as he prepares to leave Arsenal in January.

That’s according to the Swiss international’s agent José Noguera.

“Look, I say it frankly and honestly: we agree with Hertha BSC and would like to go to Berlin,” Noguera told Sky Sports.

“Arsenal was informed about all the steps, the player and Hertha are clear. It is only about the transfer fee of the clubs.”

It suggests a tumultuous period at the Emirates is finally coming to an end.

Xhaka has featured in 16 games for Arsenal this season, including Mikel Arteta’s first in charge of the Gunners – a 1-1 draw with Bournemouth at the Vitality Stadium on Boxing Day.

However, the 27-year-old will be best remembered for the manner in which he lost the captaincy.

The low point of his three years in north London was undoubtedly the 2-2 draw with Crystal Palace, when his substitution was cheered by thousands of Arsenal fans.

Xhaka responded by screaming at the crowd to “f*** off” and throwing his armband to the floor.

In truth, that proved a point of no-return and while he has been gradually reintroduced to the first team, the disdain with which he treated the Arsenal shirt was never going to be forgotten quickly.

There were also a string of under-par performances and disciplinary issues on the pitch.

The midfielder will be hoping former Germany boss Jurgen Klinsmann, now in charge of Hertha, will be the man to get his faltering career back on track.