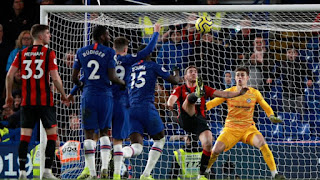 The Premier League has given reason why Dan Gosling’s winner was allowed to stand, as Bournemouth shocked Chelsea 1-0 on Saturday.

Gosling lifted the ball over Kepa Arizzabalaga in the 84th minute of the game at Stamford Bridge.

The referee initially waved off for offside, before Video Assistant Referee (VAR) ran checks and overturned the decision.

“After consulting the VAR, referee Graham Scott awarded the goal to AFC Bournemouth because an offside was incorrectly flagged during the attacking phase

It is Frank Lampard’s second consecutive defeat in the league, after they lost 3-1 at Goodison Park last weekend.