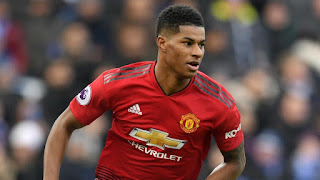 Arsenal legend Thierry Henry has disagreed with Tottenham boss, Jose Mourinho over the future of Manchester United forward Marcus Rashford as a striker.

Mourinho had wondered if the England star can still play as a centre forward following the decision of past and present Manchester United managers selecting him on the wing.

Rashford, 22, is in fine form this season and scored his 11th Premier League goal of the campaign in United’s thumping 4-1 victory over Newcastle at Old Trafford on Boxing Day.

He has played predominantly off the left wing this season, with both Ole Gunnar Solskjaer and previous boss Jose Mourinho considering it his best position.

Mourinho even made note of it earlier this month when Rashford gave a man-of-the-match display against Tottenham, saying “As I always told, from the left. Not as a nine, from the left. I knew it, I told the boys. I told him exactly the way he does things.”

But France legend, Henry, who similarly transitioned from being a winger to playing through the middle, noted Rashford is showing signs that he could be a force as a centre-forward.

“I always liked him. Sometimes you suffer from what you have,” the Frenchman told Amazon

“That means, he’s quick. People want him to play on the left or the right because he’s quick.

“I think he can do a hell of a job as a number nine. I always have confidence in him in front of goal.

“But I like his tenacity. He’s lively, he runs at people. People are seeing him with a different eye now and he needs to keep doing this.”