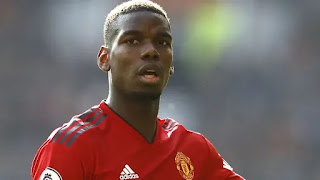 The Red Devils have made RB Salzburg striker Haaland their top transfer priority, as he apparently has a £17million release clause in his contract for next month.

Super agent Mino Raiola represents both Haaland and Pogba, who is keen to leave for Real Madrid.

There are now concerns that Raiola could hold them hostage, by convincing Haaland to move to Old Trafford, with the agreement that Paul can leave.

Manager Ole Gunnar Solskjaer made it clear last week that Pogba, who has spent much of this season injured, will not be departing in January.
“He is not being sold in January.

“I hope he will play before the end of the year, but I am not going to push him. I can’t risk any setbacks or injuries.

“Players can choose their own representatives.

“I had probably my best friend looking after me and it is so important that every player has complete 100 per cent trust in whoever represents them.

“Agents work for the player. The player is in charge.

“I don’t have any issues about who represents players because I don’t really speak to them. I have got nothing to do with the money.

“I speak to the players when I need to speak to them. I don’t talk through agents,” Solskjaer said.