EPL: Lampard on signing Zaha, Chilwell, Ake for Chelsea will be a miracle 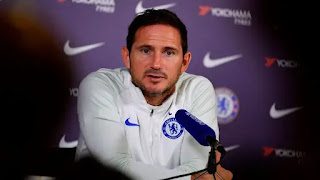 Chelsea manager, Frank Lampard, has responded to speculations he wants to sign the Premier League trio of Wilfried Zaha, Ben Chilwell and Nathan Ake when the January transfer window opens.

The Blues are now able to make recruitments, after the successfully appealed their transfer ban from FIFA at the Court of Arbitration for Sport (CAS).

Since that announcement, Chelsea have been strongly linked with moves for the three players.

When asked about the club’s interest in those three players, Lampard told a press conference on Friday afternoon: “We want a top calibre of player who can improve us.

“I won’t hone in on those three but I’ve said before I’m happy with the squad. We have to look [at signing players] if we can.

“It is a joint-effort with the scouting teams, the board, the owner, myself. We work together.

“I will recommend players who can help us. I want players who want to come here and win and be a Chelsea player.”.