EPL: Klopp explains why he was angry during Liverpool’s 4-0 win over Leicester 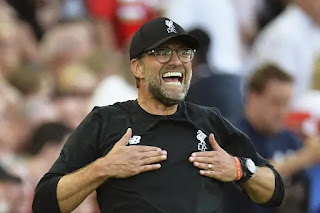 Liverpool manager, Jurgen Klopp, has given reasons he was angry with his players, during their 4-0 at Leicester City on Boxing Day.

The Reds scored three times within second-half minutes, to put the game to bed at the King Power Stadium.

But Klopp was left screaming instructions from the touchline, as he was unhappy with their inability to keep the ball and conserve energy.

“In the last 10 minutes, in this part of the season, you don’t have a situation often where the game is pretty much decided.

“But we were still sprinting and I thought, ‘wow, how mad is that?’

“So I was really shouting out there, just wanted to keep the ball, so Leicester didn’t attack us.

“There are a lot of things we have to improve – how we can manage the game in those situations, how we can play football, how we defended in the first half.

“There are so many things we have to work on,” Klopp told Amazon Prime.