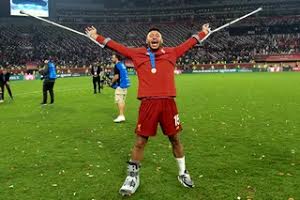 Liverpool’s victory over Flamengo in the FIFA Club World Cup finals was unfortunately marred by an injury to Alex Oxlade-Chamberlain​. The Liverpool midfielder looked to have rolled over top of his ankle, and was forced of in the 75th minute in Qatar.

“If you see it already on television again, for us in the game it was not so easy, he showed me now the video and when he’s landing he gets the kick and rolls over,” said Jurgen Klopp about the Liverpool midfielder.

While Ox went immediately into the dressing room for treatment, he did manage to come out for the post-match celebrations with his teammates, albeit on crutches and in a walking boot.

“He feels OK. We will see. Of course, not perfect – far away from being perfect – but we will see if it’s a ligament stretch only or is ruptured, partly ruptured or whatever, we have to see,” said the affable German.

“That’s a big shadow again but that’s how it is in contact sport. He seems to be OK.”

When Ox has been available, he’s been a dynamic element for the Liverpool side, either as an advanced midfielder or in a forward role. His fun and boisterous personality has made him a favorite among the squad and the fans alike. Unfortunately, he’s never managed to get through a full season for Liverpool without ligament damage.

With Oxlade-Chamberlain set for what seems like at least a few weeks on the sideline, and a glut of games upcoming, there will be opportunities for others to step in. Naby Keita has finally gotten a run of games this season, and has shown the class that had so many here at TLO towers expecting him to be the breakout player of the year. Xherdan Shaqiri and new signing Takumi Minamino could also see opportunities to slot in as a wide forward when Mohamed Salah or Sadio Mane need a well deserved break.

In the meantime, we’ll all hold our collective breath and hope for the best from the scans.