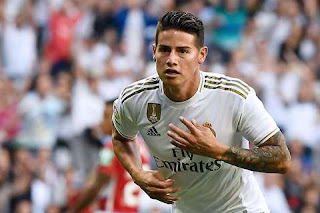 Is James Rodriguez a wonderful player For The Premier League?

The Colombian announced himself on the world stage when he put in a number of superb displays at the 2014 World Cup.

He was rewarded with a big money move to Real Madrid, but that transfer hasn’t worked out how he would have intended.

Rodriguez has spent the past few seasons on loan in the Bundesliga with Bayern Munich, where he has impressed.

Zinedine Zidane decided to keep him at Los Blancos this campaign, but he’s struggled to get in the team.

Rodriguez has played just nine times for Real Madrid this season. His last appearance for the club came exactly two months ago.

He looks almost certain to end his stay at the Spanish club when the January transfer window opens. But where will he go?

Well, if Spanish outlet ElDesmarque are to be believed, he could be about to make an incredible transfer.

Everton recently shocked the world when they appointed Carlo Ancelotti, one of the best managers in the world, earlier this month.

Ancelotti is expected to be backed in the transfer market and he’s aiming extremely high as he reportedly wants to make Rodriguez his first signing.

READ ALSO   EPL: I should Not Be Compared To Cristiano Ronaldo - Rashford

The two worked together at Real Madrid and are said to maintain a great relationship.

ElDesmarque say that Everton are in ‘pole position’ to sign him and that they are preparing an offer worth €50m.

They conclude the report by writing ‘everything points to him going to Everton’.

Wow. What a signing that would be.

It’s important to note that ElDesmarque aren’t the most reputable outlet in Spain and this news could be far from the truth.

But, when you think about it, the transfer does make some sense.

Rodriguez thrived when Ancelotti was manager of Real Madrid between 2013-2015.

He may be swayed by the opportunity to work with his former boss.

Yerry Mina, Rodriguez’s countryman, is also at the club and that’s another incentive for him to make the move.

So, it would be a shock move and one that must be treated with caution until more reliable outlets report about it.

But what a move it would be for Everton if they are able to put it off.