Arsenal vs Man City: Ljungberg demands Help from Gunners’ board 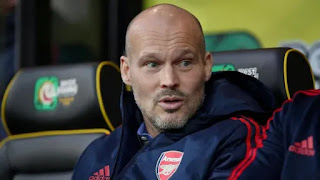 Arsenal’s interim manager, Freddie Ljunberg, has asked the board for help as he continues to take charge of the team.

Ljunberg feels he doesn’t have enough support in the dugout, having brought in Per Mertesacker from the club’s academy.

The Swede, speaking ahead of Sunday’s game against Manchester City, pointed to the number of assistants Unai Emery had, before he was sacked last month.

“If you look at the person who was here before, he had a lot of staff.

“I don’t have many staff. If you keep on going like that for months and months, it’s not easy. But that’s totally up to the club.

“The club have said I have to wait until they make a decision, so I can’t do anything. I have Per Mertesacker, but he is the academy manager helping me with the coaching,” Ljunberg said.