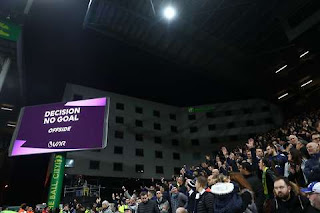 And We could hear from the stance as they kept screaming….F*ck VAR”

A chant we’ve heard a lot during most every Premier League games this season.

Why? Because it’s a complete waste of time.

During today’s matches, THREE goals have now been ruled out by VAR for offside – and all of them were ridiculously tight.

Firstly, Dan Burn’s first ever goal for Brighton was disallowed during their game against Bournemouth. You couldn’t see with a naked eye from the replays that the defender was offside.

Luckily for the Seagulls, they still ran out 2-0 winners.

Later in the day, VAR was at it again.

During Crystal Palace’s 1-1 draw with Southampton, Wilfried Zaha was adjudged to have been offside before he assisted Max Meyer.

Again, replays were pretty inconclusive as the game ended 1-1.

Then, at Carrow Road, Teemu Pukki had a brilliant goal disallowed by VAR for, once again, a very marginal offside decision. How Ridiculous?

First it was Dan Burn, then Wilfried Zaha and now Teemu Pukki all have goals chalked off by VAR for being offside…

🚨 We shall rename today “offside by a shoulder day” in the Premier League.

First it was Dan Burn, then Wilfried Zaha and now Teemu Pukki all have goals chalked off by VAR for being offside… pic.twitter.com/k4mxWZAtMI

What makes things worse is that the system being used isn’t even 100% accurate.

Earlier in the season, a report in the Daily Mail explained how there is currently a margin of error.

“Referee bosses insist the technology being used gives almost 100 per cent certainty in tight offside decisions – but we can reveal that is simply not the case,” they wrote.

“The technology used in trying to determine when a ball was passed and when a run was made is actually not advanced enough – with a margin for error that could be as big as 38.8cm (14inches).”

Do we really need football to be absolutely flawless and disallow goals for a player apparently being centimetres offside?

Is that the reason we brought in VAR? To spend minutes drawing wonky lines to see if a player’s armpit is more advanced than a defender’s foot?