Adama Traore is dangerous we need to be at our best!- Klopp on maintaining unbeaten run 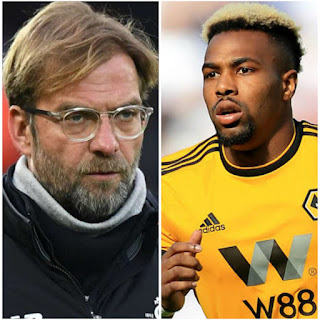 Liverpool manager, Jurgen Klopp has identified Wolves’ Adama Traore as the player that could give the Reds much troubles when both side meet at Anfield on Saturday.

The Reds beat Leicester City 4-0 at the King Power Stadium on Boxing Day to send them 13 points clear at the top of the Premier League table.

Their next game will at home to Wolverhampton Wanderers, who could present a big test.

Wolves have several stars in fine form, and Klopp singled out Traore in his pre-match press conference.

“At Barcelona, I saw thousands of players and he was there as a kid. I saw him at Boro, he was exceptional but someone had to give him the right information,” he said.

“Big big talent and you don’t think he’s young, but he is still very young. Now, he found the right situation.

“Everyone was pretty sure that would happen and now it has at Wolves. Makes it really dangerous. In a big space.

“[Jamie] Vardy is difficult to defend, but I would say Traore is even harder to defend because his speed is incredible.”