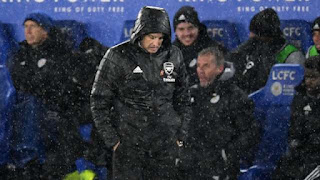 Arsenal’s 2-0 defeat at Leicester on Saturday leaves Unai Emery with a worse record after his first 50 matches in charge than Arsene Wenger managed in his final half-century of matches at the helm.

The Gunners extended their winless run across all competitions to six matches at the King Power Stadium , with Jamie Vardy and James Maddison grabbing the goals for the Foxes.

Arsenal’s resistance crumbled when Vardy finished off a crisp passing move in the 68th minute, before Maddison’s low drive sealed a comfortable win for Brendan Rodgers’ side seven minutes later.

The result leaves Emery’s side sixth in the Premier League table and nine points adrift of the top four after 12 fixtures of the 2019-20 season.

Arsenal have amassed a grand total of 87 points from Emery’s first 50 games, which is one fewer than they managed in their final 50 matches under Wenger.

The Gunners’ record of 17 points and -1 goal difference marks their worst start in the top flight since 1982-83, with pressure likely to ramp up on their under-fire manager after another damaging setback.

Eyebrows were raised when record signing Nicolas Pepe was left on the bench at the King Power, with Emery opting for a 3-4-1-2 formation to try and neutralise Leicester’s attacking threat. 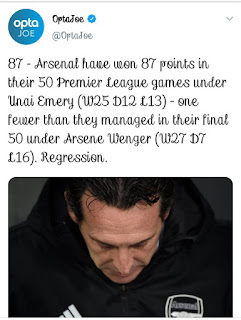 Arsenal kept the Foxes at bay for over an hour, but offered very little at the opposite end of the pitch, with their first shot on target not arriving until after the 53rd minute.

Leicester, meanwhile, proved once again that they are capable of mixing it with the Premier League’s elite, picking up a fourth successive victory while also solidifying their place in the top four.

The Gunners will now have to wait until after the international break for another chance to close the gap on their rivals in the race for the final Champions League spot.

Southampton are due to arrive at the Emirates on November 23, five days before Arsenal resume their Europa League campaign at home Eintracht Frankfurt.