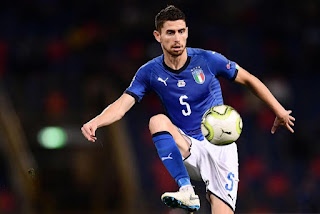 Chelsea midfielder, Jorginho has predicted a ‘tough’ clash when Frank Lampard’s side take on Manchester City in the Premier League fixture on Saturday evening.

According to Jorginho, the Blues will have to work hard to beat Pep Guardiola’s men at the Etihad Stadium, adding that the Citizens are one of the best teams in the world.

Chelsea head to the game following a 2-0 victory over Crystal Palace in their last encounter.

“What can you say about Manchester City? They’re one of the best teams in the world and we know that,” Jorginho told VBET News.

“It’s very hard to play against them. We are prepared for that game and we know it’ll be difficult.

“We have to work hard and try to win, because we do want to win every game. It’ll be hard.”
The kick-off time for the match is 6:30pm