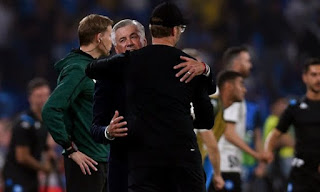 Jürgen Klopp has revealed he was presented with a special gift from Napoli manager Carlo Ancelotti in the summer, but has yet to open it.

The boss was given a bottle of red wine by the Italian tactician, inscribed with a congratulatory message about the Reds’ Champions League success, ahead of the pre-season friendly match in Edinburgh.

Ultimately, Napoli would go on to win the fixture 3-0 in Scotland on July 28 and Klopp anticipates another ‘battle for body and mind’ when the teams meet in the Champions League at Anfield tonight.

He wrote in his column in the official matchday programme: “Tonight is the third time we meet this season, although only the second in a competitive match. We played Napoli in Edinburgh pre-season and I think it’s fair to say they got the better of the game that day.

“However, my positive memory of the occasion in Scotland was the incredibly classy gesture from Carlo. He bought a very lovely bottle of red wine and wrote a touching congratulations message on it, for what we had achieved the season before.

“I was suitably embarrassed in the moment he gave it to me, to the point I was lost for words. People who know me well will tell you this is a very rare occurrence.

“Carlo is one of the all-time greats. His achievements as a player, coach and manager would take up the entirety of this programme if I was to list them. And achieved in different countries. Wow – so hard to do.

“I have a confession to make to Carlo and that is that I still haven’t drunk the wine. It takes pride of place at home. I’m sure one day I will, but for now the sentimental value of the gift means it remains unopened.

“However, as has been proved since, Carlo’s generosity of friendship never extends to when our sides face each other as competitors.

“They really punished us in Edinburgh, although I know there were other factors that contributed to our performance that day and it was a friendly. And then back in September they got the better of us in Italy in a superb football match.

“I hate losing as much as anyone, but on that day I could not hate our performance. I thought we acquitted ourselves really well. It was the sort of performance that under most circumstances and against most teams would be good enough to win.

“I have plenty of reference points when it comes to highlighting our opponent’s quality tonight. The games we played last season were probably the toughest I can remember, in Naples and Liverpool.

“The matches are so intense, physically and mentally. It’s a battle for body and mind when we play them.

“But I think it’s important to realise they respect us also. The game we won here last season, by a single goal, I think we absolutely deserved to. The games we lost over there, we could easily have got more from.

“So on the field it is a mutual respect for two clubs who really deserve to be considered among the best in Europe. As well as Carlo, I welcome the Napoli players, staff, officials and supporters to Anfield. I hope other than the 90-plus minutes on the pitch they enjoy their visit to this very special city and region.”