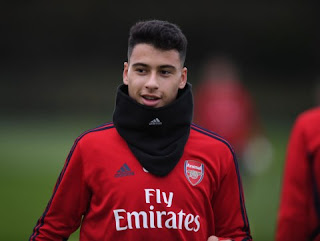 Jurgen Klopp has once again hailed Arsenal youngster Gabriel Martinelli and praised Gunners technical director Edu for unearthing a talent even Liverpool’s scouts did not know about.

The Brazilian teenager was initially brought in as a prospect for the future but has quickly established himself in the first-team squad, making eight appearances in all competitions.

He has been particularly prolific in the Cups, scoring three times in the Europa League and hitting back-to-back braces in Carabao Cup matches against Nottingham Forest and Liverpool.

Klopp was positively glowing in his assessment of Martinelli afterwards, describing him as a ‘talent of the century’, and he doubled down on that praise on Monday. Asked about his remarks regarding Martinelli, Klopp told Brazilian television show Esporte Interativo:

‘It was not in this game only. I watch a lot of football, so I saw the Europa League games of Arsenal.

‘He’s 18 years old, right? So our scouting department is all over the world and stuff like this, but I think Edu gets all the credit for that signing – he came from… wherever.

‘He’s really unbelievable. So young, looks so mature already, is a proper threat. Yeah, he looks like a really decent player.

‘But I didn’t want to put any backpack [pressure] on his back with this thing [his earlier remarks] but I just really like good football players and obviously he’s a very good one.’

Technical director Edu arrived at Arsenal this summer and brought Martinelli with him (Getty) Martinelli arrived from Ituano for a fee in the region of £6million over the summer, having been playing in the fourth tier of Brazilian football.

He was named in Unai Emery’s matchday squad for the very first game of the season against Newcastle, coming off the bench in a 1-0 win, and has made the Premier League squad eight more times since, though is yet to start.