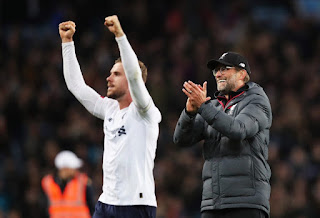 Liverpool manager Jurgen Klopp has insisted it will be ‘impossible’ for Liverpool to remain undefeated for the whole Premier League season.

The Reds maintained their unbeaten start to the top-flight campaign by scoring two late goals to beat Aston Villa 2-1 on Saturday.

Recall that Arsenal are the only team to go unbeaten in a Premier League season.

When asked if Liverpool could match Arsenal’s ‘Invincible’ 2003/04 campaign, Reds boss Klopp told Sky Sports: “It is not possible if you play like we did until we conceded the goal.

“It was not bad, it was actually the opposite, it was good football, but it was not the winning mentality we need.

“It is probably not possible, but we don’t think about it to be honest.

Klopp urged his players to learn from their mistakes at Villa Park. 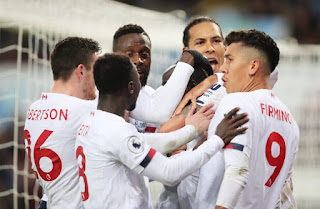 Klopp said: “We still have to learn and improve and sometimes you have to get knocks and we got knocks. For little mistakes we got knocks but in the moment we could sort it.

“It’s not that we didn’t deserve to win, I’m fine with the performance but there were moments I didn’t like.

“We made it difficult for ourselves. We started playing football well but not exactly how we should have. Aston Villa were ready for a proper fight and a proper battle.

“We conceded a goal and it’s not so easy to change this wrong path immediately.

“When you watch the game one team deserved to win and it’s us. I can imagine how bad Aston Villa will feel, with all they did they will have deserved something