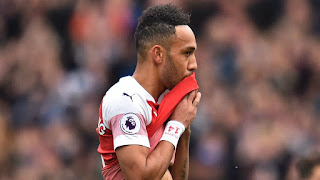 The Arsenal squad is not in full support of manager Unai Emery’s decision, to strip Granit Xhaka of the Arsenal captaincy and hand it to Pierre-Emerick Aubameyang.

Xhaka was removed as skipper, after clashing with fans in last month’s 2-2 draw at home to Crystal Palace.

According to The Athletic, some players within the squad, feel that the Swiss midfielder was “thrown under the bus” by Emery and do not support the choice of Aubameyang as his replacement.

Although the players were given the opportunity to vote on their captain after Laurent Koscielny left for Bordeaux, they were not consulted at all when Aubameyang was named captain.

Most of them only found out, when he announced the news at a press conference, before their Europa League fixture against Vitoria.