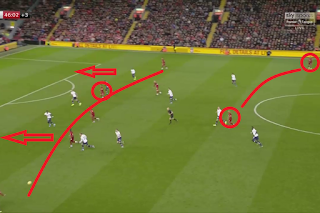 Liverpool’s lineup before any game causes a certain amount of conversation, and often controversy.

While many lament the inclusion of certain players — cough Jordan Henderson cough — the formation is always dressed as the staple 4-3-3 that has accompanied Jürgen Klopp’s Anfield reign.

As we know, one of the things which makes Liverpool the supreme football team they are is the interchangeable nature of players in attacking transition, and we have taken a look at the formations that Liverpool often morph into that you never hear mentioned:

With the Reds pushing the full-backs high and being happy to go two-versus-two or three-versus-three in defensive areas, they often take a 2-1-4-3 shape which smothers opposition in their final third and doesn’t allow them to get out or gain territory.

As stated, it often all builds from the defensive triangle of the centre-backs and Fabinho. 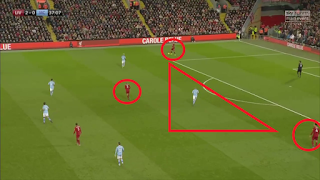 In the same move, as the Reds progress with the ball, you can see that the full-backs join both Gini Wijnaldum and Jordan Henderson in the mid-line after breaking Manchester City’s press. Roberto Firmino drops into the fabled half-space he loves to occupy while Sadio Mané and Mohamed Salah come narrow. Andy Robertson is out of shot below, but it still displays the wealth of attacking options available to Klopp’s men. 4-3-3 it certainly isn’t. 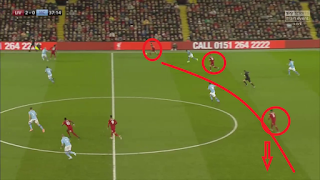 Another shape taken by the Reds when dominating in opposition final third territory is a 2-2-5-1, with the ball moving constantly across the line of five to mentally and physically exhaust opposition.

This was seen in the recent win over Tottenham Hotspur at Anfield, who were resolute and stubborn for a long period in the game, only eventually wilt to Liverpool’s attacking weight of numbers and possession.

This game was interesting because instead of another midfielder taking the same line of Fabinho, it was Trent Alexander-Arnold who used him as a marker, following some dangerous counters down the Reds right from the visitors in the first-half. 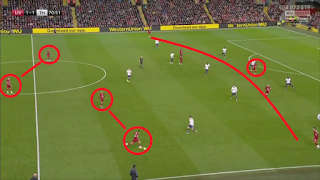 There is definitely more than meets the eye when it comes to the Reds current lineup and formation. It is well worth remembering that the next time you see what is dressed as a 4-3-3, but in reality is anything but.