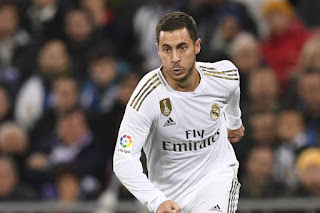 Real Madrid forward Eden Hazard has said he thinks the 2019 Ballon d’Or should be awarded to a Liverpool player.

“I would give it to a Liverpool player. Mane, Salah or Van Djik deserve it. If Sadio had won AFCON with Senegal, there would have been no debate. It would be beautiful if he won it. Or Momo [Salah], who is one of my friends. It would be a good thing for both African and English football.”

Liverpool players dominate the 30-man Ballon d’Or shortlist for the 2019 award. The Reds have seven players, more than any other club, nominated for the Golden Ball:

Jurgen Klopp’s side have enjoyed a successful year and have established themselves as Europe’s best team. They won the European Cup for a sixth time in May, beating Tottenham Hotspur 2-0 in the final of the UEFA Champions League.

The Reds finished as runners-up in the Premier League in 2018-19, being pipped to the title by a point by Manchester City. However, they remain unbeaten in 2019-20 and currently top the table by eight points from Leicester City:

Ballon d’Or odds on Ronaldo chopped today and further murmurs suggest he really could be in the conversation to challenge for it. Surely not! Van Dijk remains favourite

Team-mates Mane and Salah have also been in prolific form for the Reds, and the duo’s speed and willingness to drive at defenders make Klopp’s side a fearsome attacking unit.

Van Dijk is seen as the Liverpool player most likely to capture the award but faces stiff competition from Barcelona captain Lionel Messi and Juventus’ Cristiano Ronaldo. The winner will be announced at a ceremony in Paris on December 2.